For children who are taking their first steps in the slot hobby and need to stimulate their psychomotor skills, the world of Scalextric has several products that can be perfect.

There are several brands that make this type of circuit, more basic, without any difficulty for the little ones to just enjoy the game and also the assembly process.

🏎 The Scalextric of the smallest: MyFirst Scalextric

Among them we find MyFirst Scalextric, a very basic slot circuit in which children can enjoy with simple and rounded shapes.

This type of circuit comes with no small parts, all are large for safety, and barely takes up any space when assembled or stored, as it is foldable.

The pieces are placed on the folding panel as a template and connected to the power supply but without achieving great speed the cars, being handled with large steering wheels with two buttons, one yellow and one red.

If you press only yellow you go at a slow speed and if you press both you accelerate a little more. In this video you can see how is the form, assembly and operation of My First Scalextric.

The game comes in many colours and shapes that stimulate the senses of the little ones, introducing them to the world of slot in a basic but fun way.

There are several types, there is the normal one and also the My First Scalextric Driving School version, to practice road education while enjoying the game.

There is also a version featuring Lyoko Code characters that mixes the world of Scalextric initiation with block building games. Its name is Scalextric Construblock Code Lyoko.

The size is somewhat larger as the Compact version is in 1:43 scale, but with adult supervision it can be a lot of fun to build and play.

Without a doubt a safe bet of fun that promotes interactivity between the little ones of the house and their parents.

The brand of tracks and cars Slot, Carrera, has within its catalogue a perfect product for children from three years of age.

This is a beginners’ circuit called Carrera First, which is easy to set up and promises many hours of fun for young people starting out in the world of slot racing.

There are many types, notably the following, characterised by the cartoon, film and video game characters that are most popular at that age:

They are licensed by Disney Pixar and themed with the film Cars. We find both the first ones that came out with the film as a slot version and other more modern ones: 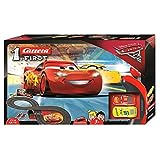 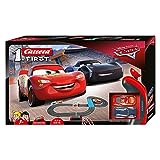 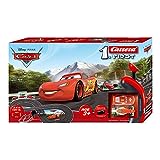 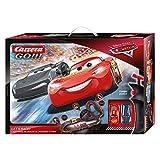 There is also a Carrera First Mickey Mouse and the Roadster Racers circuit where Mickey and his friends can compete by driving the cars. 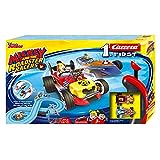 The Carrera First Nintendo Mario Kart circuit, with the video game’s characters as drivers, stands out, as it does on other racing scales. 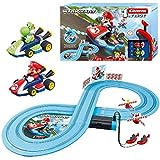 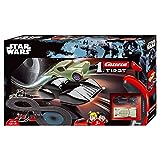 We can find other circuits licensed for Carrera First such as

Two cars of the famous “Mini Cooper” models, with their characteristic British air, compete on this circuit.

On this circuit the youngest will be able to drive their first Ferraris on a slot scale.

All these options of initiation to the world of Scalextric and slot in general for children are perfect as a gift so that they can become fond of it and then move on to play with larger scales, such as 1:43 and 1:32.